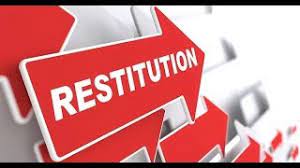 Section 144 makes provisions for the purpose of the doctrine of Restitution.

Restitution means restoring of anything unjustly taken from another.

It means restoring to a party the benefit which the other party has received under a decree subsequently held to be wrong.

The doctrine of restitution is that, on the reversal of a decree, the law imposes an obligation on the party to the suit who received an unjust benefit of the erroneous decree to make restitution to the other party for what he has lost.

The doctrine of restitution is based upon the well known maxim that the act of the court shall harm no one.

Before restitution can be ordered under this section, the following three conditions must be satisfied :

The restitution sought must be in respect of the decree or order which had been reversed or varied;

The party applying for restitution must be entitled to benefit under the reversing decree or order; and

The relief claimed must be properly consequential on the reversal or variation of the decree or order.

In order to entitle a person to apply under section 144, two conditions must be satisfied :

He must be a party to the decree or order varied or reversed.

He must have become entitled to any benefit by way of restitution or otherwise under the reversing decree or order.

AGAINST WHOM RESTITUTION MAY BE GRANTED ?

Section 144 applies to the parties or their representatives and does not apply to sureties.

WHO MAY GRANT RESTITUTION ?

An application for restitution lies to the court which has passed the decree or made the order.