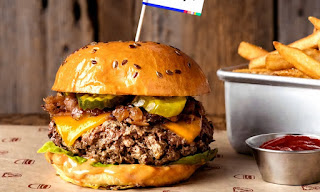 Humans love eating meat. Vegetarians and vegans (this blogger is a vegetarian) don\’t stand a chance. In quite a few countries in the world, you simply have to starve if you are a vegetarian.  In many others, your only ordering choice in a restaurant is likely to be an apology of a salad, that could more appropriately be fed to a cow !
Any chance that you can turn the human race into vegetarians ? Well, at least one company thinks so. The aptly named Impossible Foods based in California (where else)  would like to try. An interesting Q&A with the founder that I read in the Guardian, prompted this post.
The logic for turning the human race vegan is impeccable. The largest environmental impact that humans have created is from rearing animals for food – cows being the primary culprit. The resources utilised – water, land, etc – per pound of meat is also the largest. The absolutely atrocious conditions in which we rear and kill farm animals has to be a permanent blot on the human species (pig farmers in Iowa – are you listening ?) And if the population of farm animals decreases, there is a better chance of wildlife prospering,  as one of the chief causes of habitat loss is grazing.
Of course, this is not going to happen. Go back to the first sentence of this post.
I however have this feeling, totally unsubstantiated by data, that this might be a long term trend. Technology in food production is on the cusp of a revolution. After all humans don\’t eat meat because they like to kill animals. They eat it because they love the taste. If, and when, plant based foods are engineered to taste like meat, there is every chance that people will start to switch. Especially if it is cheaper.  And then, slowly, the ethical side of it will start to play a part. If you can satisfy your nutrition and the craving for taste without killing, why wouldn\’t you do it. After all, if many of the meat eaters actually saw how their meat was being produced, a good proportion will turn vegetarians immediately !
But this is not going to happen in a hurry. Impossible Foods is just a fad and, this being California, fads are always welcome. But good luck to them. I might even come out of retirement and open the India branch – at least it will get me into the good books of the awful gau rakshaks !
But one day, in the distant future, maybe 100 generations later, our descendants will look upon with horror at \”prehistoric man\” for killing and eating animals. And maybe somebody will read my post from the archeological archives and pronounce me as a prescient wise man !
https://www.youtube.com/channel/UCCzOJDJZHoBttdHAjJsnN9w?sub_confirmation=1