In this meeting, mutual discussions were held regarding various Global Maritime issues concerning India like Ban on Single Use Plastic by India for reducing Marine Pollution, Availability of low Sulphur fuel complying to IMO 2020 Convention and installation of Mahatma Gandhi Bust at IMO Headquarter, London.

As India is celebrating 150th birth anniversary of Mahatma Gandhi, Shri Mandaviya impressed upon setting up of the ‘Mahtama Gandhi Bust’ at the IMO Headquarters, as a mark of respect to the great global leader. Secretary General, Mr. Kitack Lim consented for setting up the bust at IMO headquarters, London. “This will be one of the prominent busts of Mahatma Gandhi at UN headquarters in the world. It is indeed a matter of great honor and proud moment for India”, Shri Mansukh Mandaviya stated there during media briefing. 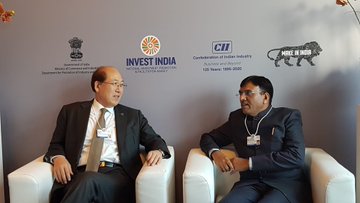 126 people are talking about this

Further, India’s engagement with IMO and role with the International community in the global maritime scenario was applauded by the Secretary General, IMO. India’s recent initiatives for accession to Hong Kong Convention and enactment of the Recycling Act 2019 were also greatly acknowledged and appreciated. Mr. Kitack Lim has assured to extend his full co-operation for the Indian Seafarers injail / custody in different countries.

Shri Mansukh Mandaviya is presently on his four-day official visit to Davos to attend the Annual World Economic Forum Meeting 2020 and having one-on-one meetings with all important World leaders and CEOs of the global companies.