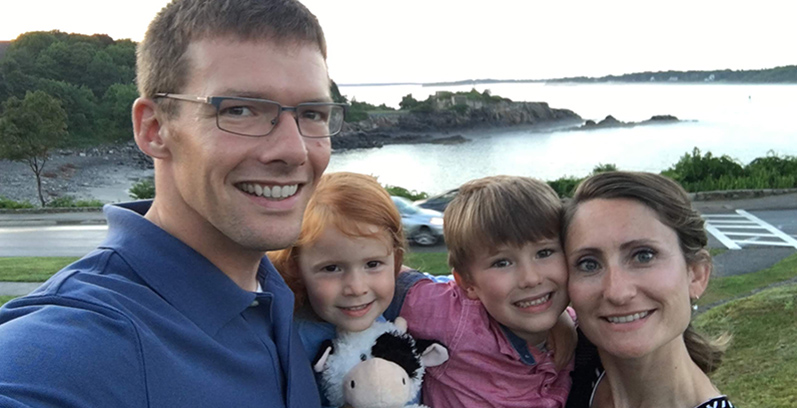 What makes a good manager?
For UVM alumnus Nick Managan ’05, it’s all about accountability and hard work.
Managan has been employed full-time at Cabot Creamery Cooperative for ten years, working his way up through the ranks and being mentored by his supervisors along the way. In 2017, he was promoted to Northeast marketing manager and had years of experience under his belt in customer service, marketing, communications, and event planning.
But one area he needed more training in was managing staff. His new role was the first time he would be in a supervisory role with full-time employees reporting to him. Managan enrolled in UVM’s Leadership and Management Program, which offers eight, one-day seminars in Burlington. The program addresses everything from emotional intelligence to conflict and negotiation to accounting.
“I thought the program did a great job giving a broad perspective of the things you need to focus on as a manager,” he says. “I really loved the emotional intelligence and conflict and negotiation seminars. It was nice to learn more about those areas and gain a little more self-awareness.”

A Priority to Never Stop Learning

Managan joined Cabot in 2005, first as a part-time staffer sampling cheese at events in New York City. He returned to his native Vermont in 2009 as Cabot’s special events coordinator. He later became the co-op’s Northeast marketing and communications integrator before being promoted to his current role.
Even though Managan has worked for Cabot for more than a decade, he says he strives to continue to learn and grow.
“It’s important to improve all the time,” he says. “Education is one of the seven co-operative principles and a priority for Cabot. I’m grateful for the opportunity to learn.”
Another principle at the heart of Cabot is concern for community. In February, Managan and 100 Cabot staff and farmers participated in the Special Olympics Vermont Penguin Plunge in Lake Champlain fundraiser. The co-op’s Department of Gratitude  also promotes and supports a variety of volunteer opportunities with its Reward Volunteers program.

A Sense of Community

Meanwhile, outside of work, Managan and his wife are raising a therapy dog—a golden retriever named Lou—who visits schools and nursing homes through Therapy Dogs of Vermont. Managan also coached for the first time this winter, volunteering for first and second grade basketball in Waterbury.
“Volunteerism is part of the fabric of Vermont and at the heart of our farmers,” he says. “You can change the trajectory of someone’s day by helping someone. It comes down to caring and trying to make the world a better place, starting with the community you’re in.”
That sense of community and caring carries over to the workplace, he says. Being engaged, accountable and hardworking are just a few of the things that make a leader and manager effective.
“It’s about making sure you’re supporting your team, making sure they know what the expectations are and making sure you’re providing the resources they need,” he says. “A good manager is checking in with staff, making sure things are running smoothly and putting in their own work.
https://www.youtube.com/channel/UCCzOJDJZHoBttdHAjJsnN9w?sub_confirmation=1