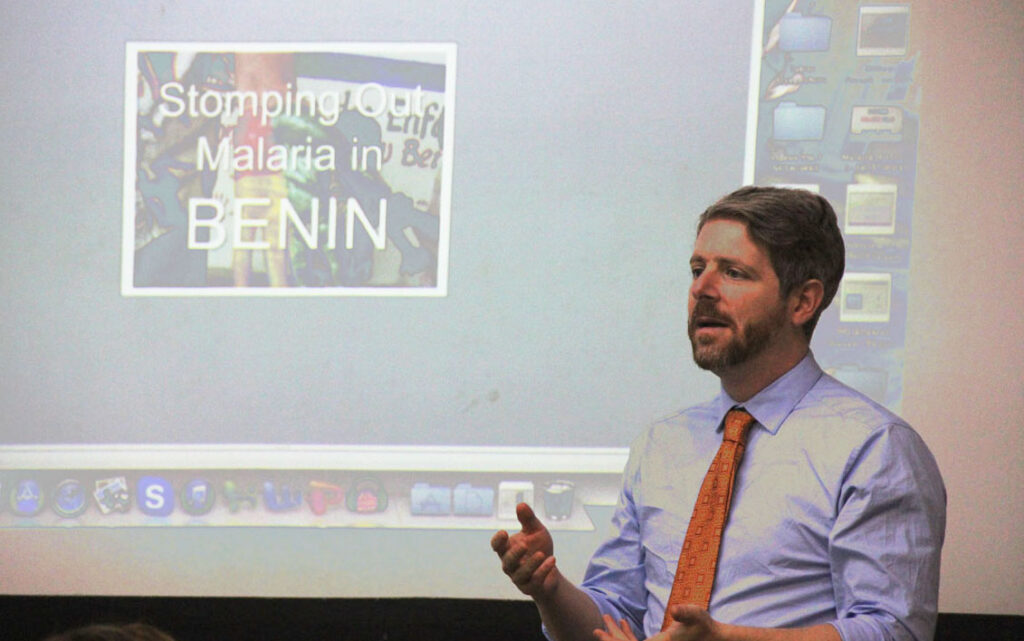 As malaria claims hundreds of thousands of lives each year in sub-Saharan Africa and South Asia, there are fears that efforts to eradicate the disease are being undermined by funding shortfalls and fragile health care systems.
While there has been progress to prevent the spread of malaria, the World Health Organization says more needs to happen to eliminate the disease. According to the 2016 World Malaria Report, children and pregnant women in sub-Saharan Africa have greater access to tools that stop the transmission of malaria. Diagnostic testing for children and preventive treatment for pregnant women has risen dramatically across the region over the last five years, and the use of bed nets treated with insecticide has expanded rapidly.
Still, significant gaps in the number of people with access to preventative measures and the fragile health systems that exist in many countries are stymying progress, according to the World Health Organization.
Malaria causes flu-like symptoms that can lead to severe complications and death. In 2015, there were 212 million new cases of malaria and 429,000 deaths worldwide, mostly children in the African region.
We talked with Matt McLaughlin, a UVM Master of Public Health student and program manager of Stomping Out Malaria in Africa, a Peace Corps program that aims to support the international malaria eradication program, about the challenges to eliminate malaria.
Matt has worked for a decade on bed net distribution. Consistent use of bed nets can reduce malaria transmissions by as much as 90 percent, according to the Nothing But Nets organization. However, according to WHO, a fifth of households in sub-Saharan Africa did not have access to bed nets in 2015, and fewer than half the households had sufficient insecticide-treated nets.

Why are bed nets not consistently used?

Of the people not using a net, the vast majority of them, the reason is that they just don’t have one. This is not to dismiss the issue of under utilization by those who do have a net. Some of that happens, too. But despite lots and lots of work on net distribution and lots and lots of progress we remain far short of a scenario where everyone who needs one has one.

What are the obstacles to getting nets to people?

One strategy for net distribution is the mass campaign where you distribute them all at once across a country. It is a devil is in the details kind of challenge. Senegal—which where I work the most, so I’ll use that as an example—when I last did a mass distribution there they had 13 million people, and there is an average of two people per sleeping space. So, you’re talking about distributing 6.5 million nets, which is just a huge logistical challenge with lots of devilish details. Nets have to be warehoused at the national level, shipped to regions and warehoused there, loaded on smaller trucks to get to clinics. Sometimes it’s putting nets in canoes or on the backs of bikes or—and I’ve done this—climbing up a mountain with a bale of nets on your head because there is no actual road to a village. And before all this can happen you need an accurate count of how many people actually need nets in these communities and that means a comprehensive census. You do all this work and after about a year, some nets get ripped or burned by candles and then they’re no longer effective. Another year goes by and more nets taken out of commission.

What is the life span of a bed net?

Two years and change is the consensus of how long bed nets last. The insecticide on the nets will last through 20 washings.

How else are the nets distributed?

If you’re pregnant, you can get a free net at a clinic. Children at a certain grade level will get a free net at school. There are some community organizations that distribute small numbers of nets on an ongoing basis. Those ancillary channels are good, but I don’t think they’re sufficient.

What are some ways to educate people about using bed nets?

There is more that we can do with utilization. For example, there is a belief that if it is the dry season, there are no mosquitos and therefore no risk of malaria and people are less likely to use the net. Yet, we know that people are getting malaria even in the dry season. And net care and repair is important, too. You need to wash them with regular soap not detergent and make sure they hang in the shade to dry. You can also sew bed nets if they get holes for longevity. Educate people around these issues and we might see better net longevity.

Can you tell us about some other projects you are working on?

I also help identify and evangelize flagship projects. The current most important project is called PECADOM+. It’s a French acronym for home-based care, and the “plus” is a unique addition that Peace Corps and our partners have identified—weekly door to door sweeps by community health workers looking for malaria cases.
We’re now doing a variant of the PECADOM+ projects in schools because schools are such a natural place for low effort and high impact. One of the pilot programs in Senegal provided the same basic training to school administrators that a community health worker would receive for the door-to-door program. As a result, administrators were finding many malaria cases, even in places where there were existing community efforts to eradicate malaria. The school officials also identified many malaria cases in the dry season, disproving the belief that there is no malaria at that time.

In your work, do you find that the world is becoming complacent because of the many gains in fighting malaria?

Total donations have flat-lined over the past five years. That is worrying. When you’re making progress, everyone is excited and they want to push hard and take part. But when your progress slows—because the end is always harder than the beginning—it’s harder to muster that same excitement from political leaders. The funding growth is slowing down, and with that, so are the gains—that’s the first warning sign of complacency. That said, the funding level donations have plateaued at is quite high. The U.S. and others are still donating billions to this cause and that is heartening. Also I am convinced that we can make bigger gains with the money we have if we’re smart about it. There is room to make improvement
https://www.youtube.com/channel/UCCzOJDJZHoBttdHAjJsnN9w?sub_confirmation=1