On the Way to Law School, a Student Finds His Calling for Medicine 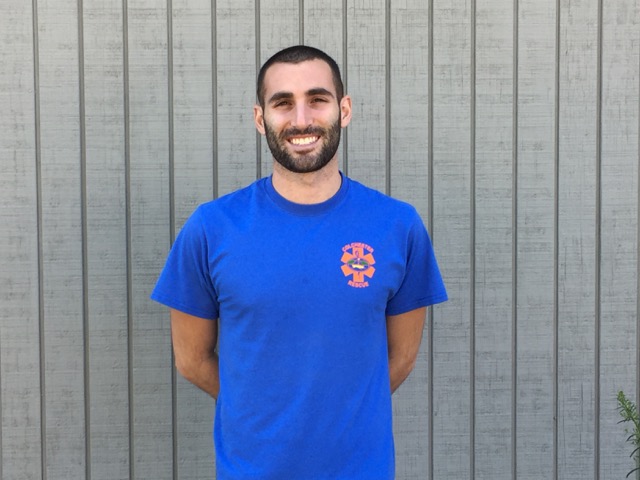 Until he was a college senior, Matt Lebow thought he wanted to become a lawyer. Then two months before taking the LSATs, he had a change of heart. Rather than going to law school, Lebow decided to pursue a career in healthcare.
The 26-year-old Los Angeles native, who graduated from George Washington University, enrolled in the UVM Post-Baccalaureate Premedical Program last year. Lebow, whose father is an emergency room physician and his mother a registered nurse, followed in his parents’ footsteps early on, when he became an EMT at age 18, then a paramedic at 23. Still, it wasn’t until his last year in college — where he was studying political communication — that he decided to carve out a career in medicine.
We talked to Lebow about growing up with a healthcare family, his plans to study emergency medicine, his work as a paramedic, and his current research to examine the frequency of hospital-acquired thrombocytopenia, a deficiency of platelets in the blood.

Your parents met while working in the Emergency Department, and you spent a lot of time with your father in the ED when you were growing up. What was it like as a child to watch your father treat patients in an emergency room setting?

The emergency room environment is very much second nature for me. As a kid growing up, I had dinner in the ED on almost a weekly basis while my father was on shift, and I’d walk around with him as he took care of patients. Whenever I got hurt as a kid, I never had to go to the ED for stitches because my dad would just come home from work and stitch me up in the kitchen.

How do you think this experience benefited you?

It was eye-opening to see so many different ailments when I was a kid. Also, it was interesting to see the same person who dropped me off at swim practice intubate a patient. The first time I saw a cardiac arrest was when I was 14 years old. I was blown away by the dynamics, even though I had no idea what was going on. I’m happy that I was exposed to all of this at such a young age, as it gave me a certain perspective on life. The early exposure gave me the ability to maintain a certain level of calmness when I’m treating patients.

Why did you make a change from law to a career in emergency medicine?

Like most children of healthcare practitioners, I tried to separate myself from my parents and was drawn to law and politics during high school and college. During my senior year of college, I realized that my true calling was to be a physician, not a lawyer. This was confirmed once I became a paramedic and saw how easily the work connects with my thought pattern and decision making. It was definitely a tough decision to choose medicine, especially since so many of my close friends are already out of law school making six-figure salaries. But I know the satisfaction I get from helping others is greater than anything I would get out of a career in law. I’m so glad I landed on the path I’m on today.

Can you tell us about the work you do as a paramedic?

I work weekly shifts for Colchester Rescue. We average over 1,100 calls a year and are comprised of paid staff and volunteer members. As a paramedic, you are the most highly trained pre-hospital healthcare provider in the 911 system. I have been involved with EMS since I was 18 years old. I’m trained in a variety of procedures and skills, such as advanced airway management, cardiac support, EKG interpretation, IV access and can administer a variety of life-saving medications. With so many interventions available, the most challenging aspect of being a paramedic is deciding how aggressively to treat a patient.

What do you love most about emergency medicine?

Unique to emergency medicine — and one of the main reasons I enjoy being a paramedic — is the diversity in the patient populations and their illnesses. At one moment you may be taking care of a child with an asthma attack, and a second later you will be called for a patient in cardiac arrest. I’m drawn to the fast-paced nature and the immediate impact you have on your patients. I couldn’t see myself doing anything else.

What are some of the challenges and rewards of this type of work?

Emergency medicine is obviously a physically and emotionally strenuous specialty. I’ve seen the personal sacrifices my parents have made working in healthcare, especially my father. I can’t tell you the number of times that birthdays had to be celebrated the day before or day after because of a shift. That said, the skill set an emergency room physician has is unlike any other specialty. While you may not be an “expert” in any particular area, the breadth of knowledge you obtain is special. Emergency medicine allows you to feel like a “doctor,” meaning you have the skill set to fix a problem on the spot, whether it’s a fracture, laceration, or anaphylactic reaction. You represent the healthcare safety net of this country.

Tell us about your research on hospital-acquired thrombocytopenia

My research is through the Department of Hematology/Oncology at UVM, and involves examining the frequency of hospital-acquired thrombocytopenia (low platelet counts). While thrombocytopenia is frequently studied in trauma, pediatrics, and cardiac patients, there was little research on hospital-acquired thrombocytopenia in general medicine (patients who come into the hospital with a normal platelet count, but then have a drop below the “normal threshold”). I came up with a definition of what I consider to be thrombocytopenia and then compared that definition to three different patient populations to determine if there was any association between those who developed a venous thrombosis, those who had some kind of bleed in the hospital (like a GI or brain bleed), and those patients who died while in the hospital.
The research found that even moderate drops in platelet counts have an association with mortality and bleeding. The recommendation I concluded in this research is that clinicians should be cognizant of platelet count drops, and this is likely an indication of disease severity.
Neil Zakai, MD, MSc, a hematologist and associate professor of medicine at UVM College of Medicine, has been my senior advisor for my research. I will be published in Blood, the peer-reviewed journal for the American Society of Hematology, and I will be presenting my work in Orlando in December.

Why did you choose UVM?

UVM’s Post-Bac program has a great reputation, and I also found the linkage with the UVM College of Medicine very appealing. This close relationship between the undergraduate campus and the medical school has allowed me to surround myself with leading researchers in their fields.
And hey, the snowboarding around here isn’t too bad either
https://www.youtube.com/channel/UCCzOJDJZHoBttdHAjJsnN9w?sub_confirmation=1