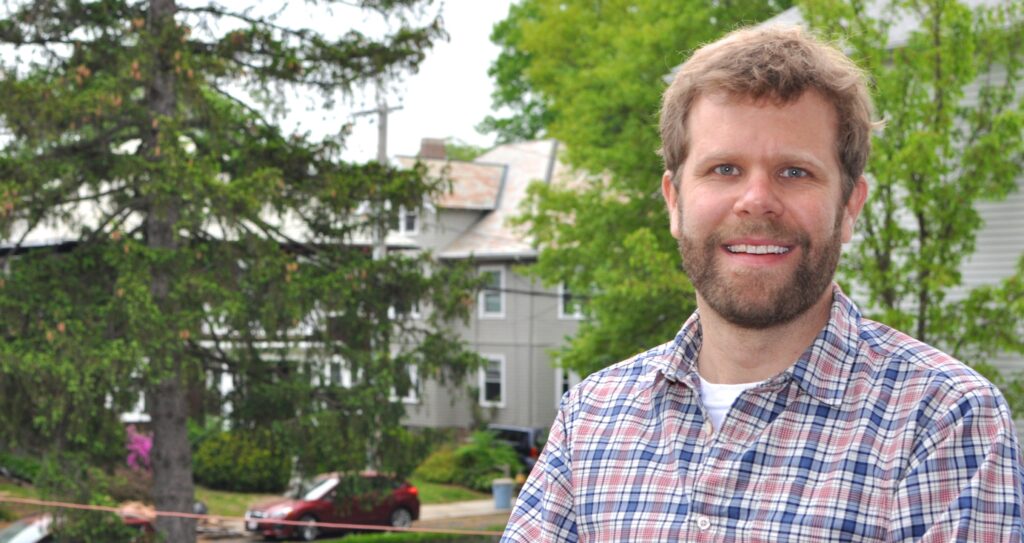 UVM alumnus Ander Wilson is a postdoctoral research fellow in the Department of Biostatistics at the Harvard T. H. Chan School of Public Health. Ander received a bachelor’s degree in mathematics from the University of Vermont, and a master’s and doctoral degree in statistics from North Carolina State University.
We talked to Ander about his work with the Environmental Protection Agency, his research on climate change, and why he’s optimistic about the future of environmental public health.
While a student at North Carolina State University, one of your research projects with the EPA was “Modeling the Effect of Temperature on Ozone-Related Mortality” to explore the combined effects of temperature and ozone on public health. What were some of your findings?
Our hypothesis was that the ozone – ground ozone, not stratospheric ozone – has a greater effect on people’s health when temperatures are higher. Ground-level ozone has become an important global air quality issue. As opposed to stratospheric ozone, which is the “good” protective layer, the concern at ground level is high ozone levels.
High ozone levels and extreme temperatures, especially heat waves, have shown adverse associations with respiratory and cardiovascular health. As a photo-chemical air pollutant, ozone formulation requires solar radiation and, as a result, is highly correlated with temperature.
We decided to pursue this research because many studies have focused on the effect of short-term ozone exposures on mortality and illness, but less is known about the joint effects of ozone and temperature. Their joint effects are extremely important because the two exposures are so highly correlated and are often observed together. Our analysis found that ozone does have a greater effect on mortality when temperatures are high as well.
Excessive heat events, or abrupt and dramatic temperature increases, are particularly dangerous and can result in above-average rates of mortality. CDC’s National Center for Health Statistics, examining death certificates from coroners or medical examiners, computed approximately 2,000 people died from weather-related causes each year. Of those 2,000 deaths, 31 percent were heat-related. (The report says 63 percent were cold-related, and just 6 percent due to floods, storms, or lightning.)
What parts of the United States are seeing both high temperatures and high ozone levels that are affecting public health and how is this expected to change in the future?
Ozone levels vary a lot between different cities. The highest levels tend to be in Southern California, as well as in other major urban areas throughout the country. Temperature acts a little differently. People perceive temperature differently depending on what they are used to so it is more relative. Our research finds that the ozone mortality burden will increase on average in the United States over 20 years, but this depends on a lot of things. For one, it depends on where you are. Ground-level ozone is projected to increase in some parts of the U.S. and decrease or stay constant in others. This relates to both local conditions, such as emissions of ozone procurers, and global climate conditions that dictate large-scale climate trends. Because ozone occurs from reactions between primary pollutants in sunlight, much of what we will see depends on emissions of primary pollutants that form ozone.
Has the ozone study led to other areas of climate/environmental public health research?
This study exposed me to a new area of environmental public health, and I am pursuing several extensions of the work. I’m currently investigating the effects of ozone with other outcomes and projecting the future health burden of ozone exposures in the context of climate change. Another area of ongoing research is work with the Public Health Foundation of India to look at the effects of air pollutants on birth outcomes, such as low birth weight. I traveled to India last winter and will return this summer to work more on the project.
As a math major at UVM, when did you first become interested in public health?
During my senior year, I interned at UVM Medical Center in Education and Organizational Development. Back then, I had no idea what I wanted to do with my career. During my internship, I worked on health policy, analyzed employee survey data, and created a database to record required certifications for the Joint Commission on Accreditation of Health Care Organizations (JCAHCO). It helped me get my first job out of college where I did health policy and nutation research.
I’ve been interested in health and public policy for many years. I wasn’t really interested in environmental public health until graduate school, which is when I had an opportunity to work with the EPA as a volunteer researcher.
With all that we now know about climate change and its devastating effects, what do you find most rewarding about your work?
Environmental public health is a very important issue, and it’s not going away anytime soon. There’s a lot of energy around these topics that I’m researching. So many people are working on studying climate change and its effect on public health. We’re trying to improve the environment and people’s health, and it’s really encouraging.