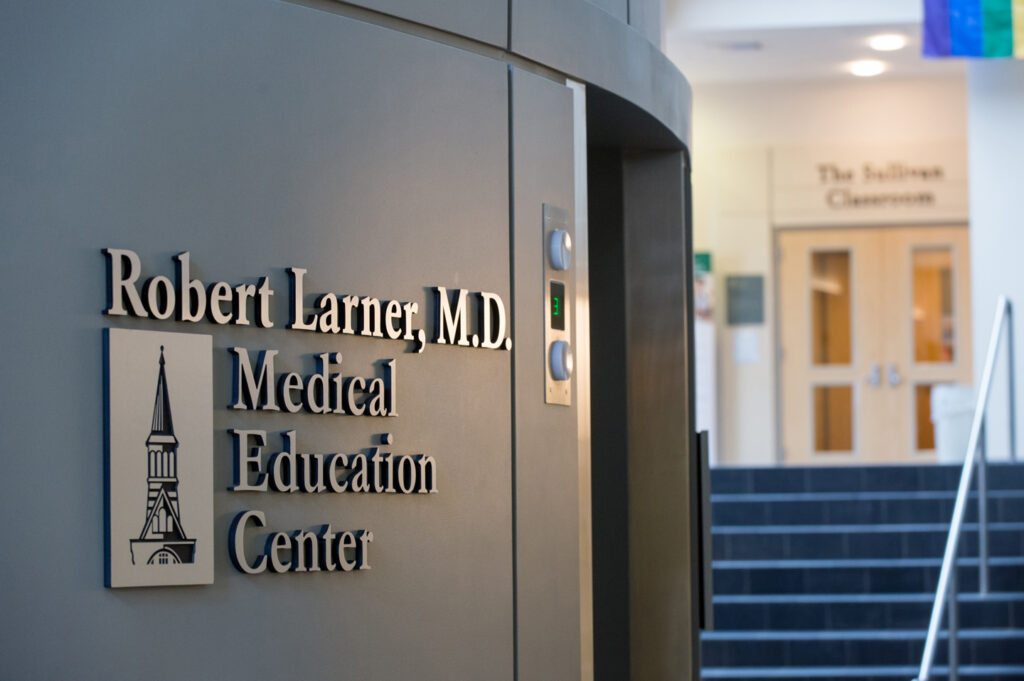 By Carolyn Shapiro
During a first-year course on human reproduction at the UVM College of Medicine, medical student Matthew Shear was startled to see lecture notes referring to a person with ambiguous genitalia as “hermaphroditic.” Shear, a member of the Class of ’17, wasn’t the only UVM medical student who noticed the outdated language, he says. He decided to email the instructor to propose a change in the text to today’s preferred term “intersex.”
The suggestion was welcomed, he says. His instructor invited Shear to talk, thanked him for his help, and told him, “I never know how to brush up on this. It’s really important that I use the right words.” 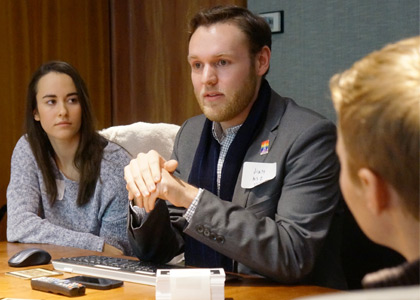 Student Matthew Shear
For Shear, the experience was another validation of the College of Medicine’s progressive approach to handling LGBTQ health topics — those related to the lesbian, gay, bisexual, transgender, queer, questioning, gender-neutral and gender nonconforming communities.
“That’s absolutely the place UVM is,” Shear says. “And there are dozens of little stories like that, proving to me that I got the correct read on this place when I interviewed.” At UVM, Shear says, he has found a pervasive openness to heightened understanding of LGBTQ issues — always with a goal to provide better care for patients. “That’s what we’re trying to create — a culture where those learning opportunities are so mainstream that everybody’s interested, everybody sees the value of being competent in that area.”
As the country progresses on LGBTQ rights, so does medical education and patient care. The College of Medicine is at the forefront of this change.

A Foundation for LGBTQ Inclusion and Educational Initiatives

Recent events in the media spotlight — the gender transformation of Caitlyn Jenner and the US Supreme Court decision on the right of same-sex couples to marry — have thrust sexual and gender identity diversity into nearly every avenue of discussion. At this point in social evolution, it has become clearly necessary for future physicians to be sensitive to, inclusive of, and informed about LGBTQ health concerns.
“We’re in a different era, because the bridge has been crossed already regarding the legitimacy of the material and the need for the material,” says A. Evan Eyler, MD, MPH, a UVM associate professor of psychiatry and family medicine and co-editor of Gay, Lesbian, Bisexual and Transgender Aging: Challenges in Research, Practice and Policy. “So now we’re looking at how best to do it, the same as you would women’s health or cancer care.”
The College began addressing that issue a dozen years ago — long before Jenner and the LGBTQ moniker became entrenched in the cultural lexicon. Around 2003, Professor of Pediatrics Paula Duncan, MD, laid the foundation for the first LGBTQ educational initiatives at the College. Since then, UVM has steadily moved to the forefront of LGBTQ medical education.
“We know that culturally, in the state of Vermont, we are on the leading edge of advocating for equality and the civil and health care rights of this population,” says William Jeffries, PhD, senior associate dean for medical education and an administrative champion of the College’s LGBTQ efforts. “It’s a natural extension that we should be leading the way in developing a cutting-edge health care approach to ensure that the needs of the LGBTQ community are met.”
In a survey of curriculum last year, the Association of American Medical Colleges (AAMC) recognized UVM as exemplary in its incorporation of LGBTQ health issues into curriculum. Jeffries’ colleagues at other schools, including members of the LGBTQ community, tell him that UVM is ideally situated — on a progressive campus and in a forward-thinking state — to take a pioneering role in LGBTQ healthcare education, he says.
“I like to build on strengths, and I view this as a strength,” Jeffries says. “Our job is to make this the best medical school it can be. That means our education program needs to be recognized as a leader in areas where we are innovating.”

A Cultural Climate to Emphasize the Importance of LGBTQ Health

In November 2014, the AAMC released new competencies in LGBTQ healthcare required for medical students at its member schools. The goal is to train doctors to address patients’ specific health needs no matter their sexual or gender identity, says Kristen Eckstrand, MD, PhD, founding chair of the AAMC Advisory Committee on Sexual Orientation, Gender Identity and Sex Development and a psychiatrist at the University of Pittsburgh Medical Center.
“A lot of people are well-intentioned, and they want this area to be addressed,” Eckstrand says. “The challenge is you don’t know what you don’t know.” 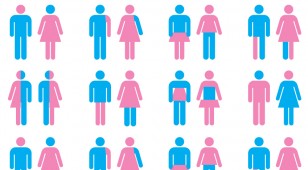 UVM has distinguished itself by building the institutional support and cultural climate to emphasize the importance of LGBTQ health, Eckstrand says. “It has a unique combination of very dedicated students and very dedicated faculty members, which is a catalyst for change in this area,” she says of UVM. “And that’s where a lot of medical schools fall apart.”
Across the country, medical schools are grappling with ways to build LGBTQ content into their curriculum. Some have added distinct courses focused on LGBTQ topics or spend a few hours or a day on LGBTQ health. Others simply pledge support for “gay-friendly” initiatives or rely on nondiscrimination clauses in their policies, Eckstrand says.
“When I speak to colleagues nationally, the approach that some institutions take is at the early stage,” says Catherine Nicholas, EdD, assistant professor of family medicine education and operations director of the College’s simulation laboratory, and director of the standardized patient program. “They create one LGBTQ+ standardized patient case.”
UVM’s structure is different, she adds. “It’s not an LGBTQ course. It’s integrated. It’s part of the fabric of what we do. Incorporating LGBTQ scenarios in standardized patient instructional cases is crucial, Nicholas says. Who you are as a patient matters, because we teach a very patient-centered approach. So who you are, your age, who you live with, what you do for work, how you look at health and illness, is all important.”

An Approach that Involves Academics and Attitude

The College of Medicine has taken a broad, all-encompassing approach along three primary directions: increasing LGBTQ representation among students and faculty; weaving LGBTQ subject matter into every category of content and teaching; and developing students’ communication skills and compassion in working with LGBTQ patients.
The third piece is perhaps the most important, fundamental to the humanistic elements of doctoring. It’s more about attitude than academics.
It’s an ability to respond with respect and the right questions when a patient comes out as LGBTQ during an exam. It’s an expression of support and interest when a colleague or student mentions a family with a same-sex partner. It’s the willingness to throw away traditional assumptions about gender and identity.
“Affirming who the person is and encouraging it is part of the delight in the work,” says Michael Upton, MD, ’94, clinical assistant professor of psychiatry and co-advisor to the College’s Gender and Sexuality Alliance, an advocacy group of medical students. “As physicians, we have the capacity to transmit an appreciation and a caring for the richness of the individual person who has come to see us.” 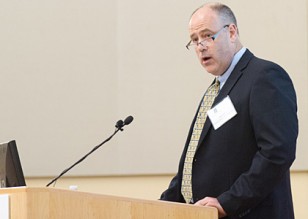 Michael Upton, MD
Upton draws much of his approach to care from his own experiences as a gay man and physician. LGBTQ doctors and faculty serve as mentors for LGBTQ students and help all of those in medical training learn how to navigate difficult topics.
“It’s not pleasant to come out to a doctor and then have them have to look at the floor because they’re so uncomfortable,” Upton says. “That’s why we need an inclusive environment, because we need students and residents, and all physicians to get this exposure, so they don’t have to look at the floor.”
Certainly, a competent physician must know when a transgender man needs a pap smear because he still has a cervix or a lesbian needs birth control because she occasionally has sex with men. The more nuanced lessons in an LGBTQ-progressive medical school, though, guide doctors on gleaning the most crucial elements of their patients’ care, the aspects of their lives that influence their well-being.
“It starts with the basic content side of things, medical students understanding that gender is not binary and what that means from a biological standpoint,” says Eileen CichoskiKelly, PhD, a UVM associate professor of family medicine, who serves on the AAMC committee on Sexual Orientation, Gender Identity and Sex Development. “Having the ability to understand that we’re not going to put people in boxes is a primary concept,” she says. “As the care provider, you don’t have to have all the answers, but you do have to at least have an understanding and be able to be accepting.” She continues, “The reality is you’re going to have a range of patients like this; so we want to prepare our students for the universe of the patients that they’re going to be encountering.”
With these changes, the College has come a long way, Dr. Eyler says. At first, more than ten years ago, student evaluations of his courses in transgender health would include blunt expressions of disgust and questions about the need to endure such discussion, he says. “And I don’t get those anymore, teaching the same material.”
Eyler sees two reasons for that: “One is that our medical school has made tremendous progress in this area in a decade,” he says. “And the other is that so has the country.”

To bring in more LGBTQ students — who ultimately will add to the number of LGBTQ doctors — Jeffries adjusted the admissions process last year to ensure that LGBTQ candidates are well represented in the admissions pool. That was tricky, because years of discrimination have encouraged many to remain closeted.
UVM’s voluntary process allows applicants to self-identify, making it one of the first two medical schools in the country to take this step, Jeffries says. “We’re giving students the assurance that we believe this is important,” he says. “We’re not asking this to be discriminatory. We’re asking to ensure that an integral portion of our community is represented.” 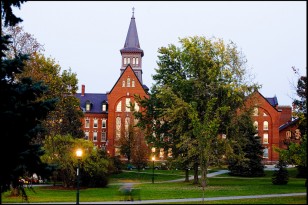 In the most recent admissions cycle, Jeffries says, the College saw the number of LGBTQ-identified students increase — along with those of all underrepresented minorities, which grew from 7 percent of the entering class in 2013 to 12 percent this year.
Matthew Shear, who is openly gay and moved with his partner for medical school, says he recognized the difference at UVM during his admissions interviews. He asked schools about their LGBTQ student populations, their support and funding of advocacy groups, their hospitals’ policies on dealing with transgender patients and the option for patients to specify a pronoun in their medical records.
“Some people just glazed over, like, ‘I have no idea what you’re talking about,’ ” Shear says. “At UVM, they’re like, ‘Oh, yeah, we’re working on it.’ And as a Michael Upton, MD, ’94 student, you can pick your own pronoun with the registrar.”
He also gauged interviewers’ reactions when he came out to them and discussed his undergraduate LGBTQ activities. Some responded with “complete dismissal” and treated “those components of my application as if they were unrelated to medicine.”
When the subject arose at UVM, the representative spent about a third of the interview talking about it, which sealed the deal for Shear.
“I definitely made it a priority,” he says, “to be someplace where I was going to be embraced and welcomed to be out while training as a physician.”
https://www.youtube.com/channel/UCCzOJDJZHoBttdHAjJsnN9w?sub_confirmation=1