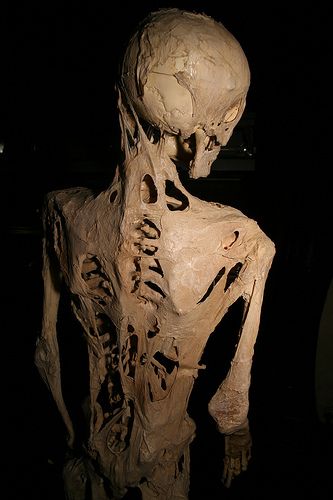 The effects of fibrodysplasia ossificans progressiva, a disease which causes damaged soft tissue to regrow as bone.

Lexi Robins, 5 month old from the UK is “turning to a stone”due to an extremely rare genetic condition Fibrodysplasia Ossificans Progressiva (FOP) that turns muscles into bones.

Lexi Robins was born on January 31 and seemed like any other normal baby, except she didn’t move her thumb and had bigger toes.

Lexi was diagnosed with a life-limiting disease called Fibrodysplasia Ossificans Progressiva (FOP), which affects just one in two million.

Due to the disorder, Lexi’s condition may worsen rapidly if she suffers any minor trauma, as simple as falling over. She cannot receive injections, vaccinations and dental care and cannot give birth.

FOP is a severe, disabling disorder with no current cure or treatment. It is the only known medical condition where one organ system changes into another. Fibrodysplasia ossificans progressiva is caused by a mutation of the gene ACVR1.

The FOP can lead to bone formation outside skeleton and restrict movement. It is believed to replace muscles and connective tissues, such as tendons and ligaments, with bone. Thus, it is generally perceived that the condition turns a body into stone.

People with this disease, which has no proven treatment, can be bedridden by the age of 20 and their life expectancy is around 40 years.

It has no current cure.