Why was Myanmar under Military coupe ? 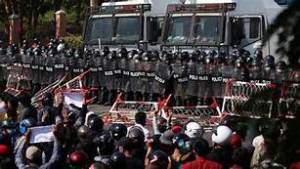 Myanmar also called ‘The golden land’ a country famous for its Buddhist culture and tradition is located in Southeast Asia. Thousands of Buddhist temples embellish it and the serene white beaches magically ornate the land. It is the 10th largest country in Asia in terms of its area with 54 million people residing, mostly Buddhist but also Muslim Rohingyas. It shares its border with China in the northeast, Thailand in its east and southeast, Bangladesh and India to its northwest, and Andaman sea and Bay of Bengal to its south and southwest.

Myanmar also called Burma became a territory in the 19th century after it lost 3 Anglo-Burmese wars. It gained independence from Britain in 1948 and was rules by armed forces under the Burma socialist programme party from 1962 to 2011. Due to increasing pressure from the western countries Myanmar’s military regime decided to transition the country towards partial democracy from 2010. Although Myanmar became democratic but the army still continued its authority and control over the territory.

On 1st February 2021 Aung San Suu Kyi and her anointed president Myint, was arrested by the military and detained under house arrest. The Burmese army general Min Aung Hlaing accused the party of voting fraud in the parliamentary elections of 2020 and imposed a state of national emergency for 1 year. The election commission reported that no record of fraud was found.

Reasons cited for the military coup include the constitutional amendments which the democratically elected government Aung San Suu Kyi was about to make in the coming term abolishing the power and control of military rule in Burma. Just after the military rule was imposed the general commented that he was on people’s side would form a ‘true and disciplined democracy’. It would hold a free and fair election once the state of emergency was over.

People of Myanmar have taken the streets and raised their voice demanding the reversal of military coup. But the military seemed hesitant on backing down, making the overall situation violent and deadly.

The military put restrictions on people’s gatherings. It used water cannons, rubber bullets, live use of fire and opened fires on more than 40 places to suppress the people revolting against them. It took control of country’s infrastructure, suspended domestic and international flights, stock market and commercial banks were also closed.  More than 400 people have dies due to this absurd violence.

United stated of Americas has imposed sanctions on Myanmar and also prohibited access to $1bn of government funds to military coup. China’s foreign ministry spokesperson said “ China is a friendly neighbor of Myanmar’s. We hope that all sides in Myanmar can appropriately handle their differences under the constitution and legal framework and safeguard political and social stability “ United Kingdom also spoke against the coup and asked the army to release Aung San Suu Kyi and the president. It also issued orders stating the British residents their to come back to UK unless and until they have an important task in Myanmar. India being an immediate neighbor of Myanmar and a democratic country is supporting the democratic government. India should share its experiences in dealing with constitutionalism and federalism with Myanmar and support it in all aspects.