Major Dhyan Chand (29 August 1905 – 3 December 1979) was an Indian field hockey player widely regarded as one of the greatest in the history of the sport. He was known for his extraordinary goal-scoring feats, in addition to earning three Olympic gold medals, in 1928, 1932 and 1936, during an era where India dominated field hockey. His influence extended beyond these victories, as India won the field hockey event in seven out of eight Olympics from 1928 to 1964.

Popularly known as The Wizard or The Magician of hockey for his superb ball control, Chand played internationally from 1926 to 1949; he scored 570 goals in 185 matches according to his autobiography, Goal. The Government of India awarded Chand India’s third highest civilian honour of Padma Bhushan in 1956. His birthday, 29 August, is celebrated as National Sports Day in India every year. India’s highest sporting honor, the Khel Ratna Award was renamed after Chand in 2021. 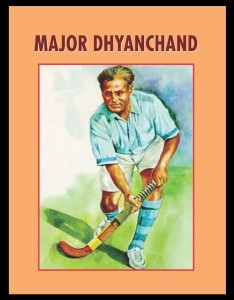 Dhyan Chand was born in Allahabad on 29 August 1905 in a Bais Rajput family. He was the elder brother of another hockey player Roop Singh and the son of Sharadha Singh  and Sameshwar Singh. Dhyan Chand’s father was enlisted in the British Indian Army, and he played hockey for the army. Dhyan Chand had two brothers – Mool Singh and Roop Singh. Because of his father’s numerous army transfers, the family had to move to different cities and as such Chand had to terminate his education after only six years of schooling. The family finally settled in Jhansi, Uttar Pradesh, India.

Chand graduated from Victoria College, Gwalior in 1932. Being in the military, his father got a small piece of land for a house.

Young Chand had no serious inclination towards sports though he loved wrestling. He stated that he did not remember whether he played any hockey worth mentioning before he joined the Army, though he said that he occasionally indulged in casual games in Jhansi with his friends. 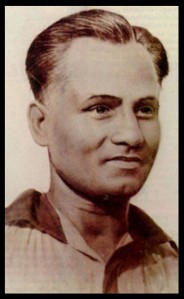 Chand continued to hold his emergency commission in the Indian Army post-Independence, with the service number IEC 3526, but was apparently not granted a regular commission. In 1951 he was honoured at India’s National Stadium with the inaugural Dhyan Chand Tournament, which he attended to the admiration of the spectators.

After 34 years of service, Chand retired from the Indian Army on 29 August 1956 as a lieutenant (acting captain). The Government of India honoured him the same year by conferring him the Padma Bhushan, India’s third-highest civilian honour.

After retirement, he taught at coaching camps at Mount Abu, Rajasthan. Later, he accepted the position of Chief Hockey Coach at the National Institute of Sports, Patiala, a post he held for several years. Chand spent his last days in his hometown of Jhansi, Uttar Pradesh, India.

Chand died on 3 December 1979 from liver cancer at the All India Institute of Medical Sciences, Delhi. He was cremated at the Jhansi Heroes ground in his hometown, after some initial problems in getting clearance. His regiment, the Punjab Regiment, accorded him full military honours.

Dhyan Chand remains a legendary figure in Indian and world hockey. His skills have been glorified in various apocryphal stories and anecdotes. A number of such these revolve around the fact that Singh had extraordinary control over dribbling the ball. Chand’s birthday, 29 August, is celebrated as National Sports Day in India. The President gives away sport-related awards such as the Rajiv Gandhi Khel Ratna (now called the Dhyan Chand Khel Ratna), Arjuna Award and Dronacharya Award on this day at the Rashtrapati Bhavan, India.

India’s highest award for lifetime achievement in sports is the Dhyan Chand Award which has been awarded annually from 2002 to sporting figures who not only contribute through their performance but also contribute to the sport after their retirement. The National Stadium, Delhi was renamed Dhyan Chand National Stadium in 2002 in his honour.

A hostel at Aligarh Muslim University, of which he was an alumnus, has been named after him.

An Astroturf hockey pitch, at the Indian Gymkhana Club in London, has been named after Indian hockey legend Dhyan Chand.

The government of India has issued a commemorative postage stamp and a First Day Cover in honour of Dhyan Chand. He remains the only Indian hockey player to have a stamp in his honour.

Dhyan Chand was among the nominees considered for India’s highest civilian award, Bharat Ratna, for 2014 and there was support for it. The award was then given to Sachin Tendulkar and C. N. R. Rao. The family members of Dhyan Chand were disappointed with government decision. The RTI was filed which suggested that the Prime Minister’s Office had ignored the recommendation from sports ministry on giving the award over Sachin Tendulkar. In 2021, India’s highest sporting honor, the Khel Ratna Award, previously called the Rajiv Gandhi Khel Ratna Award was renamed after Chand.